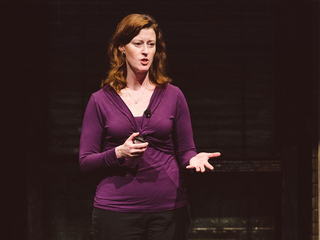 This story first appeared on news.umbc.edu and was written by Megan Hanks.

When Erin Lavik, professor of chemical, biochemical and environmental engineering, was pursuing her graduate degree, she was required to pursue a minor outside of her discipline, and she selected playwriting. Lavik found that teamwork was crucial to the success of theatre, and that it also translated well into the scientific field she was pursuing, she explained in her recent TEDx Broadway talk “Genius Is Created Through Collaboration.”
“Theatre is the greatest gift you can give an aspiring scientist because theatre is dreaming realized,” Lavik said. She shared that she watched people come together with big ideas about stories, lights, and sound, only to surpass their dreams and the dreams of others around them as they moved forward with the creative process.
Lavik discussed how collaboration is crucial in the scientific discovery process, just as it is essential to a successful production in theatre, and she described how teamwork has impacted her research. She also addressed common stereotypes about the personalities and tendencies of scientists, including that they are male, work in isolation late into the night, and are odd or strange, and said that these stereotypes need to be broken.
She points out that as young children we are all scientists, and, as we grow into adulthood and pursue careers, there is great value in continuing to support the intense curiosity and willingness to experiment and learn that children often demonstrate.
As a student interested in pursuing engineering, Lavik said, “Knowing that I could work with other people”—that science didn’t need to be a solitary enterprise—“made it a little less scary. And I went to college of be an engineer so that I could learn about science and apply it to big problems.”
The big problem that Lavik and her team are working on now is determining how to protect and repair the brain and spinal cord after injury, with a focus on stopping internal bleeding.
“I don’t know if our material will ultimately work in humans,” she said. “But I am absolutely and utterly sure that we wouldn’t have gotten to this point if it wasn’t for the fact that we have a whole team.”
A brief recap about Lavik’s talk is included on Broadway World.
Image: Erin Lavik presenting during TEDxBroadway. Photo by TEDxBroadway, CC BY-NC-ND 2.0.